Homes Under The Hammer BBC

On June 21st, 2018, Homes Under the Hammer was aired on BBC One where our very own Suzanne Dugdill went to value a house in Hindley, which was being sold at auction.

We were very privileged at Miller Metcalfe to be asked by the BBC to value the property in Hindley on Homes Under the Hammer back in October 2017.

The house was run down and needed a lot of work and tender care from being extremely damp and abandoned. The house does have a lot of potential with two reception rooms and an extension to the rear. Originally, before any renovation Suzanne went to value the property at £90,000 with a probable rental value of £500 to £525pcm. The property is in a conditional state for someone who has definitely done their research and is experienced in renovating tired looking houses and getting their hands dirty.

When the property went to auction the auctioneer started the bids at £20,000, which soon rose to a huge £60,000 and sold to a gentleman called Reza, who is new to the property Business.

7 months later, Homes Under the Hammer went back to the house in Hindley to inspect what Reza had done. Adding french doors between the two reception rooms, leaving a nice relaxed, fresh feel to both rooms. Reza was able to get rid of all the damp in the property which leaves him with a good resale price when selling. He also added an en-suite to the master bedroom. Overall, spending a total of £91,000, he will need to make a profit. So, Suzanne went back to the property once renovated and re-valued it at 95 to 100 thousand pounds. The property was restored to a high standard, with a new roof and the extension being rebuilt.

We have added the episode for you to watch 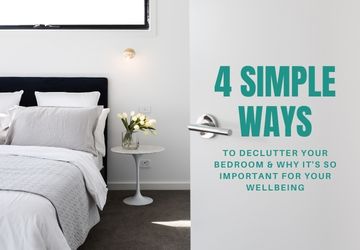 4 Simple Ways To Declutter Your Bedroom & Why ItR...

A peaceful environment can greatly benefit your sleep hygiene, and part of that includes an organised and clutter-free bedroom! Do a regular

Did you know that a carefully selected front door colour can improve the kerb appeal of your property, have a tremendous effect