Properties are selling at or over the asking price faster than ever before according to the property portal Rightmove!

It comes as the portal announced that at the start of April, the price of new properties on the market reached new highs for the third month in a row.

According to Rightmove’s April House Price Index, asking prices reached an average of £360,101 last month, an increase of 1.6% on a monthly basis and 9.9% on an annual basis.

Rightmove also found that the average time between a property being listed as available and it having an offer accepted is now standing at just 33 days! That’s 34 days quicker than the same time in 2019, which had an average time to sell of 67 days.

This record-breaking speed of sale has resulted in 53% of houses now selling at or over their final advertised asking price, the greatest percentage ever recorded by Rightmove.

What the expert’s say

“The economic headwinds of strongly rising inflation and modestly rising interest rates are being kept at bay by the even stronger tailwind of property market momentum that has carried over from last year.

“2021 saw four consecutive monthly price records from April through to July and I would not bet against that being bettered this year as we are already at three consecutive records in April.

“There are some early signs of an easing off from the frenetic pace of price rises, and buyer enquiries to agents are down by 16% on last year’s stamp-duty frenzy.

“However incredibly, buyer enquiries are still 65% above the more normal market of 2019 and the number of sales agreed is up 21%.

How to take a meter reading ahead of the energy price cap...

UK households have been advised to take a meter reading ahead of the energy price cap increase on Friday (April 1), which will 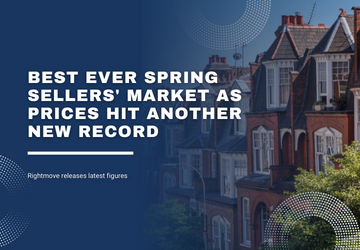 It’s official! This is the BEST EVER spring sellers market! Record breaking figures March has brought with it ANOTHER new price record